A Facebook friend (FBF) recently shared this article from On Faith, an interview with theologian Walter Brueggemann. As the interview demonstrates, Prof. Brueggemann — one of the most influential Old Testament scholars in the U.S. — is pretty clear about how much of contemporary American culture is out of sync with an accurate understanding of the message of Scripture and the Gospel of Jesus.  I suspect there are many who would be afflicted by his words, calling to mind that old adage that one of the purposes of the Gospel is “to comfort the afflicted and to afflict the comfortable.” 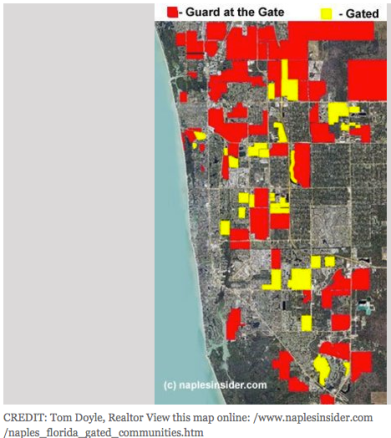 I particularly find Prof. Bureggemann’s notion of neighborliness on point, especially living in a part of the country where so very, very many people live in “gated and guarded communities,” neighborhoods where entry is limited only to residents. This map (from Gated Communities: Are you in or out? Naples Daily News, July 26, 2013) shows how much of the area in this part of SW Florida is “off limits” to neighbors outside the gate.

On another issue, I was particular edified to read Prof. Brueggemann’s response to the first of two questions about LGBTQ people and how many who claim to be Christian treat them. Here’s what was asked, and Brueggeman’s first words in response.

You talked about the poor and healthcare. What about the LGBTQ community, especially when people use the Old Testament to argue against that community?

Brueggemann claims that the starting point of this discussion must be the recognition that LGBTQ people are made in the image of God. That understanding is the very reason for the title of this blog. If we are not able to see in ourselves and others a reflection of the Divine, then what possible hope is there for dealing well with any of the myriad problems this generation or any generation faces? If we can’t see the presence of God in every person — especially those whom we so readily label as “other” — then how can Christians claim to be followers of the One who came to lead all people to God?

After briefly dispatching with concerns about what some of the various texts of Scripture supposedly say about homosexuality, Brueggemann’s concluding words are worth repeating:

The texts that are determinative are those that talk about the love of God that has been shown to us in Jesus. We can’t compromise that.