Most of us who are “of a certain age” know that the Republican Party of 2012 is very different than the one we saw in our formative years during the 60’s, 70’s and early 80’s.  Although I’ve always had a sense of this — having grown up in Massachusetts where African American Ed Brooks, a Republican, was one of our Senators — but I probably couldn’t name the specifics behind this change.  This article in today’s Washington Post, GOP platform through the years shows party’s shift from moderate to conservative, helps fill in those blanks.

The full story is worth reading, but the graphic puts in in visual perspective. 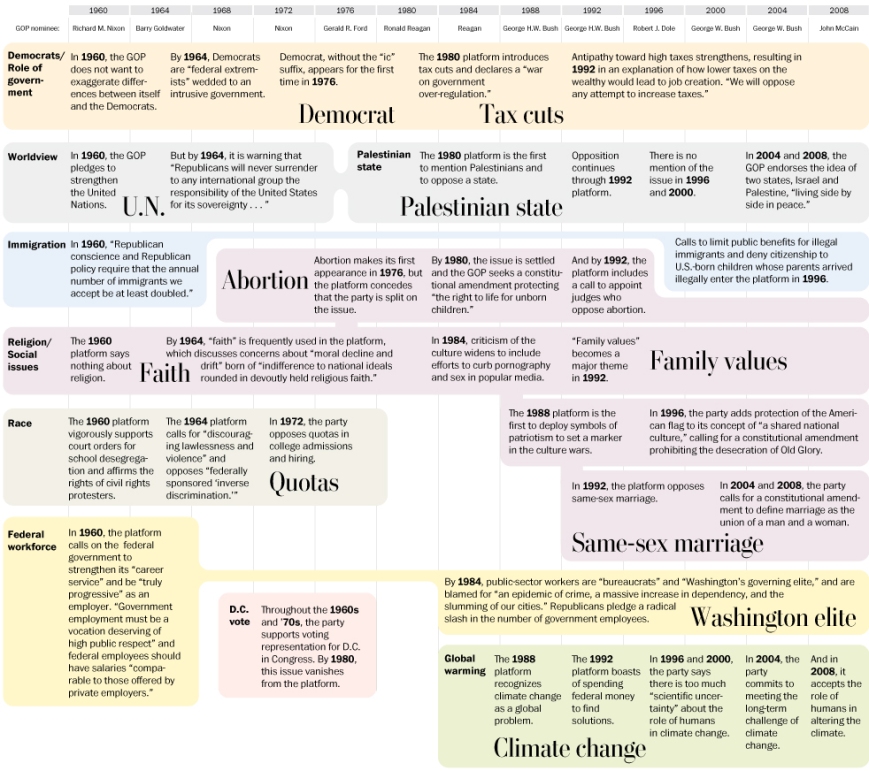 Guess I am a bit of a romantic, but I admit it … I did tear up when I saw this! How can anyone watch this video, produced by the Australian advocacy group, “GetUp! Action for Australia,” and not be moved?

To all  Catholic bishops around the world (including the Pope); all the Republican presidential candidates who have signed pledges in support of DOMA; Maggie Gallagher, Brian Brown, and other intellectually challenged supporters of NOM … how can you possibly watch this and fail to understand that support for civil (and yes, sacramental … but that’s another story) marriage will in no way harm either the marriages of heterosexuals or children?

I know that when it’s used in this sense, “Washington” means so much more than the 68 square mile piece of land along the Potomac River and its 600,000 inhabitants. But as one of those inhabitants for over seventeen years, it irks me to no end that “Washington” as a word so often becomes politicians’ shorthand way of doing just what Sen. Cornyn did to describe all that is bad with federal government and politics.  The truth is, it’s not Washington that spends money or that imposes taxes or that sneaks earmarks into legislation.  No, it’s the very politicians from Texas and Florida and Kansas and South Dakota and every other state in the nation that sends Texans and Floridians and Kansans and South Dakotans to do these things. Instead of blaming “Washington” — whose citizens don’t even have the full representation that the citizens of these other states enjoy — why don’t these senators and representatives take responsibility for their own actions and simply replace “Washington” with “we” or “senators and representatives.” More honestly, Cornyn should have said, “Earmarks are a symptom of wasteful spending by me and my fellow senators…”

That would certainly be more accurate, though perhaps, like earmarks themselves, just a little too close to home.