What more is there to say?!! 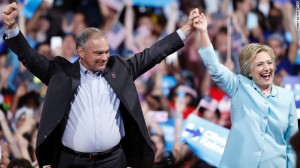 From the perspective of Christian faith, it’s hard to imagine a more stark study in contrasts than that between the recently announced presidential/vice-presidential teams. Tim Kaine gave a rousing speech yesterday (July 23, 2016) when he appeared for the first time after being chosen by Hillary Clinton as her running mate. Kaine proudly declared, “Soy católico … I’m Catholic…” and his speech was filled with explicit references that show how deeply his Catholic Christian faith has formed his values and directed his life’s work. Kaine impresses as profoundly influenced by his Jesuit education, his missionary work in Honduras, and his commitment to the teachings of Jesus as a lawyer who worked to defend the housing rights of the poor. The Clinton/Kaine duo proclaim that their lives were formed by a faith that asked how they could help others. It is a faith that puts belief into practice, living out the social, communal dimension that Christianity absolutely requires.

Trump/Pence, on the other hand, seem to be much more formed by or comfortable with the so-called “Prosperity Gospel” (an oxymoron if ever their was one).  While there are some Christian leaders in the Evangelical tradition who recognize that this “gospel” is an aberration of historical, biblical Christianity, there are many others who have succumbed to its allure. This philosophy is uniquely American. It is the spawn of the marriage between 19th century Protestant fundamentalism and that brand of American individualism which puts the self before others, the individual before community, and one’s own success ahead of or at the expense of others’ success. Its focus is on “my rights” and not the common good. To be clear, this focus on the “rights” of the individual can be exploited on either end of the political spectrum. It’s the same right espoused by gun-owners, abortion advocates, and the increasing number of laws that permit assisted suicide. At its root, the “Prosperity Gospel” makes two basic claims: First, if your faith is strong enough, God will shower you with earthly riches, wealth, and worldly success; and, second, if you have earthly riches, wealth, and worldly success, then these are signs of God’s favor.

Perhaps it does need to be stated, but this view of the Christian Gospel — preached by such megachurch leaders as Joel Osteen (who, by the way, has no theological training) and Joyce Meyer — bears so little resemblance to the actual teachings of Jesus that it cannot be rightly called Christian. It is a “gospel” without humility, without prudence, without a sense of justice. It lacks a belief that the goods of this earth are for all God’s People, not just the industrious few who stake their claim first, whose might trumps right, or who know how to manipulate the economic and legal systems to their advantage. On the contrary, as Pope Pius XI wrote in his encyclical Quadragesimo Anno (1931),

“Therefore, the riches that economic-social developments constantly increase ought to be so distributed among individual persons and classes that the common advantage of all, which Leo XIII had praised, will be safeguarded; in other words, that the common good of all society will be kept inviolate. By this law of social justice, one class is forbidden to exclude the other from sharing in the benefits,” (no. 57).

To anyone schooled in the social justice tradition of Christianity in general and Catholic Christianity in particular, this quotation will ring true. Pius XI’s reference to his predecessor, Leo XIII, is a reference to that pope’s encyclical, Rerum Novarum, which is generally considered the first papal document in modern times to spell out some of the basic principles Christian faith requires for a socially just society. From the perspective of Christianity and its two-thousand year tradition, there is no doubt that the Gospel of Jesus does not exist without Jesus’ “new commandment: love one another. As I have loved you, so you also should love one another.” (John 13:34). Come November, each of us must decide which of these two teams contending for the highest offices in the land have lived lives that most exemplify the common good the Gospel requires.